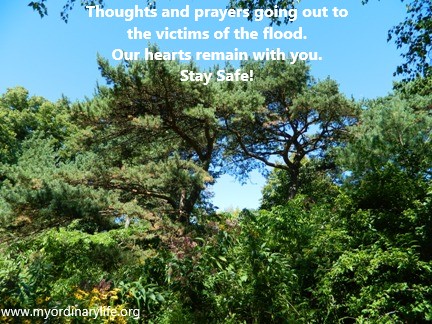 Like everybody else, I’ve been watching events unfold throughout Texas. The impact of the hurricane continues to affect the state in horrific ways. The pictures coming across our TV screens make me feel so helpless. I cannot begin to imagine the horror of having to endure what some of these people have, both the people being rescued and those rescuing them. I can’t imagine having to leave my home and my security, even having to leave behind basic essentials like medication, diapers and food for babies. Having to watch the water overtake your home and knowing that you have to leave it to stay safe is frightening. Having to venture out into the floodwaters to escape the rising water would be horrifying! You have no idea what will happen and you don’t know where that will lead.

God Bless those people and agencies that stepped in to both rescue people and to provide them with the basic needs of survival. Obviously those in positions of authority and service are out there and I know that we all sincerely appreciate them, but others have stepped up as well. To those individuals who offered up their own boats, their time, and their safety, you are incredible! To the people who have opened their homes, stores, and other venues for people to seek shelter, your hospitality and kindness is amazing.

I understand that over 5 million meals have been provided and over 30,000 people have been forced into shelters. This doesn’t even begin to include those that have been placed elsewhere, have left the area entirely, or were able to move other places with family. This nightmare is not yet over, either. The floodwaters continue to rise in different places throughout the state and will continue to affect many more thousands of people.

Despite all the devastation that we’re witnessing, the one resounding theme that we’re seeing is that the best of humanity is on display. We’re seeing people risking their own lives to save strangers’ lives. We’re seeing dozens of people lashing themselves together to rescue somebody. I’m watching elderly people being loaded into boats by men that are kind and considerate to them. I’m simply overwhelmed by the kindness of people that we’re seeing. I think, over the past several months, I’ve lost sight of the goodness that we’re capable of. It seems as if we’ve been exposed to the negative so frequently and in such large doses that we tend to forget how nice we can actually be.

As bad as this situation is, it has restored my faith in humanity. My hope is that this can be sustained. I know that the immediate urgency of this situation is going to turn into a long-term and ongoing operation. This isn’t going to end next week. People are going to be tired and first responders are going to have to get back to their own lives and situations that require their attention. At that point, tens of thousands of people are still going to need assistance. My wish is that there will still be people willing to help and that this show of humanity can be maintained over time. This is what we need to happen both in Texas and in our world. Now is the time to think about what we, as individuals, no matter where we are, can do to help out in times of need, both in Texas now and going forward. What kind of people do we want to be? What can we offer to improve the lives of those around us?

I know that all of us throughout the world are wishing the people of Texas all the best; that they remain safe and get through this as fast and as safely as possible. For those of us that cannot be there in person, we can each do whatever we’re able to do.

Sending all of our love and prayers. Be safe.