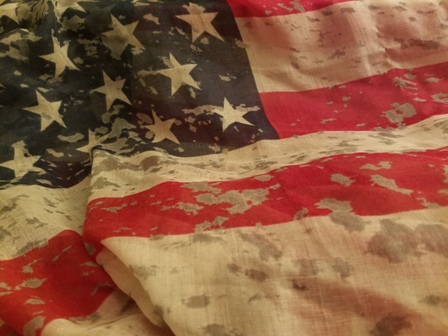 These days, there are so many things in our world that are being disputed. This isn’t a bad thing. Everything SHOULD be up for debate; it’s how we change our world. It’s long-standing practice to question our culture, our laws, and the state of our world. It’s how positive change is made. It’s not always easy and it’s not always pleasant or even peaceful. This practice of evaluation, discussion, disagreement, and action is as old as our country and it’s how we got where we are.

As citizens, it’s not only our right to question what’s happening around us, but it’s our duty as citizens to ensure that our voice is counted and that our democracy continues to grow and flourish. This means that voices should not be quieted, peaceful protests should always be allowed to happen, and every single citizen has a right to an opinion and to express it.

Our current climate of government is unlike any other in our lifetime. It seems as if every norm over the past decades has been turned upside down. The things that we’ve taken for granted such as democracy, fairness, and open communication have disappeared. We’re in a situation unlike anything in the history of our own government. Many flags have been raised; many experts in past and current administrations have grave concerns regarding the direction that our country is headed. Many individuals have strong opposing opinions and believe that the direction that we’re heading is long overdue and the right way to achieve success in our country.

Disregarding opinions on the many matters under discussion, the fundamental right to disagree is still valued in our country. In fact, it’s what we should do to ensure vigorous debate and a healthy outcome. Our voices should be heard and peaceful protests are a way to accomplish that. Other ways to express our opinions can include getting involved in campaigns, joining committees for causes that you believe in, and even just having conversations with others. Most of all, though, we can vote.

Your vote represents your beliefs, your ideals, and your position on all kinds of issues. November is coming up fast. Look at not just the presidential race, but all offices, including those in your own community. Do your homework and look at the issues and the candidates’ views on those issues. What are the things most important to you? What are their stated positions and what is their past voting history? Make your voice heard! Do your part to make this great country of ours become what you want it to be!

I am feeling super American today!  Where else would so much of what happened recently be possible?  Just think about what we’ve witnessed!

We have held a presidential election and, although it made history for its divisive nature, the American people and our democratic process prevailed.   Some people are happy and truly believe that our new president and his vision will make America a better place to live for all of us.  Others are afraid of what’s to come.  Not everybody agrees with the result, not everybody is happy, but this is our process and we elected a new president. END_OF_DOCUMENT_TOKEN_TO_BE_REPLACED

It’s finally over!  I don’t know about you, but I was more than ready to say goodbye to 2016.  I know that there were lots of good things that happened during the year, but I think that they were hidden amongst the crazy, unpredictable, and disturbing things that we all heard about daily during this past year.  It’s been discussed that there are more people now that are uneasy and frightened than in a very long time. END_OF_DOCUMENT_TOKEN_TO_BE_REPLACED

Interestingly enough, there are protests being held both in the United States and in South Korea regarding the behavior of the president (or president-elect).

In South Korea, there are more than 500,000 people peacefully protesting in Seoul to demand the president’s resignation.  Their president has apologized twice for the scandal involving a long-time friend that was getting advance policy information with which to advise the president on a number of state affairs.  The friend had no experience or official position and has been accused of an abuse of power and fraud.  It is believed by some that the president is simply a mouthpiece of several others making decisions behind the scenes.  According to a demonstrator: “It’s an explosion of their feelings,” demonstrator Jinwon Kim says of the crowds. “People are very angry.”

Back here in the United States, we are also experiencing protests in various cities throughout the country about our recent presidential election.  Thousands of people are marching in the streets carrying the message of “Not My President”.  These protests appear to be unprecedented in American history.  The protesters are acting on their displeasure with the president-elect’s behavior, words, and decisions.   This election has been singular in the negative, angry, threatening and divisive remarks being made throughout the campaign.  I think most of our country has agreed on that.  The fact that our new president-elect has made so many Americans feel unwelcome, angry, frightened, and unsafe is turning into a big problem for him and the people are letting him know how they feel.  This is key-we have to acknowledge people’s feelings, whether we agree with them or not and whether we believe they are justified or not.  It doesn’t matter how each of us feels; we need to respect everybody’s right to express their opinion.  THIS is the American way.

We hoped that whoever won the election would move forward in a much more positive manner, one that we could all get behind and believe in.  The fact that our votes were almost 50-50 obviously leaves half of us unhappy with the current president-elect.  What’s more American than protesting your dissatisfaction?  We are given the right to do this…peacefully.  There are positives for protesting.  We are letting Mr. Trump know that we are watching him, watching his choices, his actions, and his words (both tweeted and spoken).  We are going to hold him and his staff accountable for the promises he made, for pulling the country together and moving forward on a positive path.  It appears that, to date, he is not following the standard protocol in his actions…not about staffing choices, business matters, publicity and transparency, nor his communications.   I believe this is why people are now protesting.   I think most of us would like to believe that he will, very soon, become the person that we all want to have as president.  He has this one moment in history to make the right choices.  We’re all hoping that he does the right things.

This accountability is important and something that should be an ongoing process, not just when we’re unhappy about something.  We should all be watching the people that make decisions that directly affect us.  If you disagree with something, voice your opinion, become active in the cause, write a letter, make a phone call, and effect change.   Contact your member of Congress!  There is always work to be done at the local government level, which is what affects our daily lives in so many ways.  Getting involved is so important because it not only allows you some control in how your life is affected, but keeps you informed about the issues as well.  If we are all more involved in this process, we won’t need to rely on hearsay, Facebook, internet and television news stories that may or not be factual.  We will be educated participants in the process and be able to make informed choices on issues.

In most recent history, the Black Lives Matter movement was more prominent.  Do we all know what that was about?  Certainly…because it was out there, it was talked about, it was acted on, even if not always apparent.  This is how we, as Americans and South Koreans alike, can express our opinion, hold people accountable, and make change when necessary.  It indicates exactly how we feel about something and it needs to be acknowledged.  This is obviously a world-wide form of communication and one that is effective.   Protests, in whatever form they take, should always be acknowledged and taken seriously.